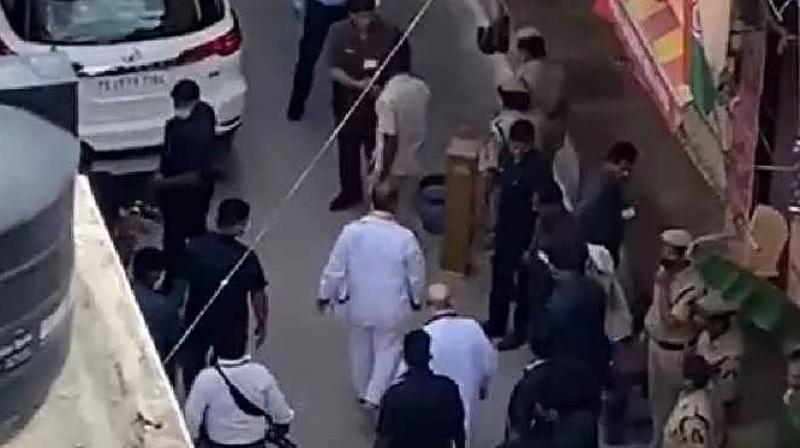 Hyderabad: A video of Telangana BJP chief Bandi Sanjay carrying footwear of union Home Minister Amit Shah went viral on social media on Monday. In the video, the BJP leader was seen rushing to get the shoe and placing it in front of the Union minister to wear when he came out of the Ujjaini Mahankali temple in Secunderabad on Sunday.

As the video went viral, Congress and TRS leaders trolled Bandi and termed him as ‘slave of Gujarati leaders’.

TRS Working President and Minister KT Rama Rao tweeted, people of Telangana are watching ‘Gujarati slaves who carry Delhi shoes and also the leader who is fighting against the Delhi leaders.

The Telangana Congress official Twitter handle also shared the video with the comment, “The self-esteem of Telangana is a cart laid at the feet of the former Tadipar! @bandisanjay_bjp @BJP4Telangana  Leaders are the pinnacle of slavery! Your lives in BJP are so vile! And if Telangana BJP president is carrying sandals, what else should the rest of them do?”

The video was posted by TRS social media convenor Krishank on Twitter with the caption: The speed and focus in bringing slippers shows tomorrow BJP will keep our State at the feet of Amit Shah… Beware Telangana

During his one-day visit to Telangana on Sunday, Amit Shah attended a public meeting at Munugode, where  former Congress leader Komatireddy Rajgopal Reddy was inducted into the BJP fold.