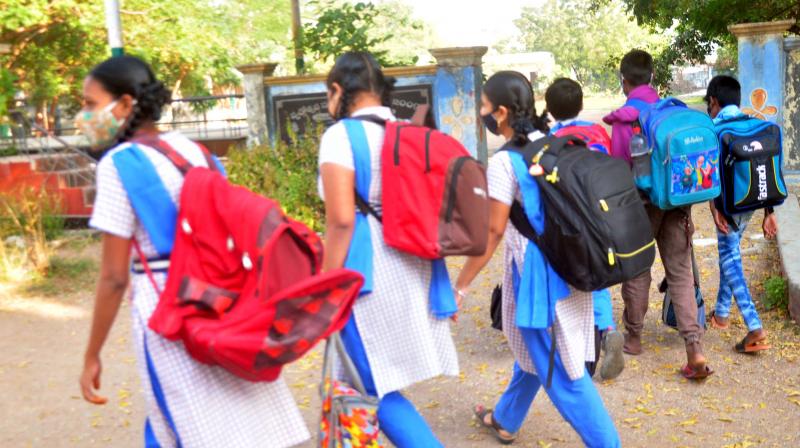 Only 17 states are implementing the norm. Chief minister Jagan Reddy on Tuesday called for steps to implement the same in AP.

The Right of Children to Free and Compulsory Education, commonly called the Right to Education Act, was enacted in 2009. It guarantees free and compulsory education to all children between the ages of six and 14. Due to policy reasons and as the earlier court stay on the provision was not implemented in AP, though the RTE act rules were notified in 2010.

The subsequent governments failed to implement the provision that helps create conditions for social inclusion and gives choice of schools to children from the disadvantaged and economically weaker sections.

Notably, advocate Thandava Yogesh had filed a petition in 2017 seeking the implementation of 25 per cent quota in the AP High Court and the verdict came in January, 2022 for its implementation.

Chief Minister Jagan Reddy advised officials to implement the provisions of the RTE act including section 12(1) (c)  —  25 per cent of the entry class seats in the private unaided schools in Andhra Pradesh.

Due to the Covid-19-related issues framing the relevant rules as per the National Council Protection of Child Rights (NCPCR) SoP and Union Government directions, there was a delay but this will be implemented from AY 2022-23, officials stressed.

According to last year’s data, there were around 9500 schools with 35,000 to 50,000 seats in AP. If every school is involved in the process in the coming years, the seats might go up to around 1 lakh.

The state commissioner of school education has entered into a Memorandum of Understanding (non-financial) with the Delhi-based think tank Indus Action, for this purpose. It has pioneered the best support systems in best policy practices and technology solutions for the implementation of RTE section 12(1)(c ) in about 12 states through partnerships with the state governments and local civil society organisations.

As a part of the MoU, Indus Action will be supporting the CSE in terms of governance, technology support and capacity-building activities.

School education state commissioner Suresh Kumar said the proposals were sent to the government. The department would issue the notification for the first admission cycle in accordance with the revised academic calendar for 2022-23.

The module to submit the application and other details will be released by the department soon.

Meanwhile, advocate Yogesh said the government has violated norms towards implementation of 25 per-cent quota for these sections of students and hence a petition was filed in the high court.

He said the government should have started a central admission portal, announced the admission schedule with all details and given wide publicity about the 25 per cent quota. But, it did not do these.