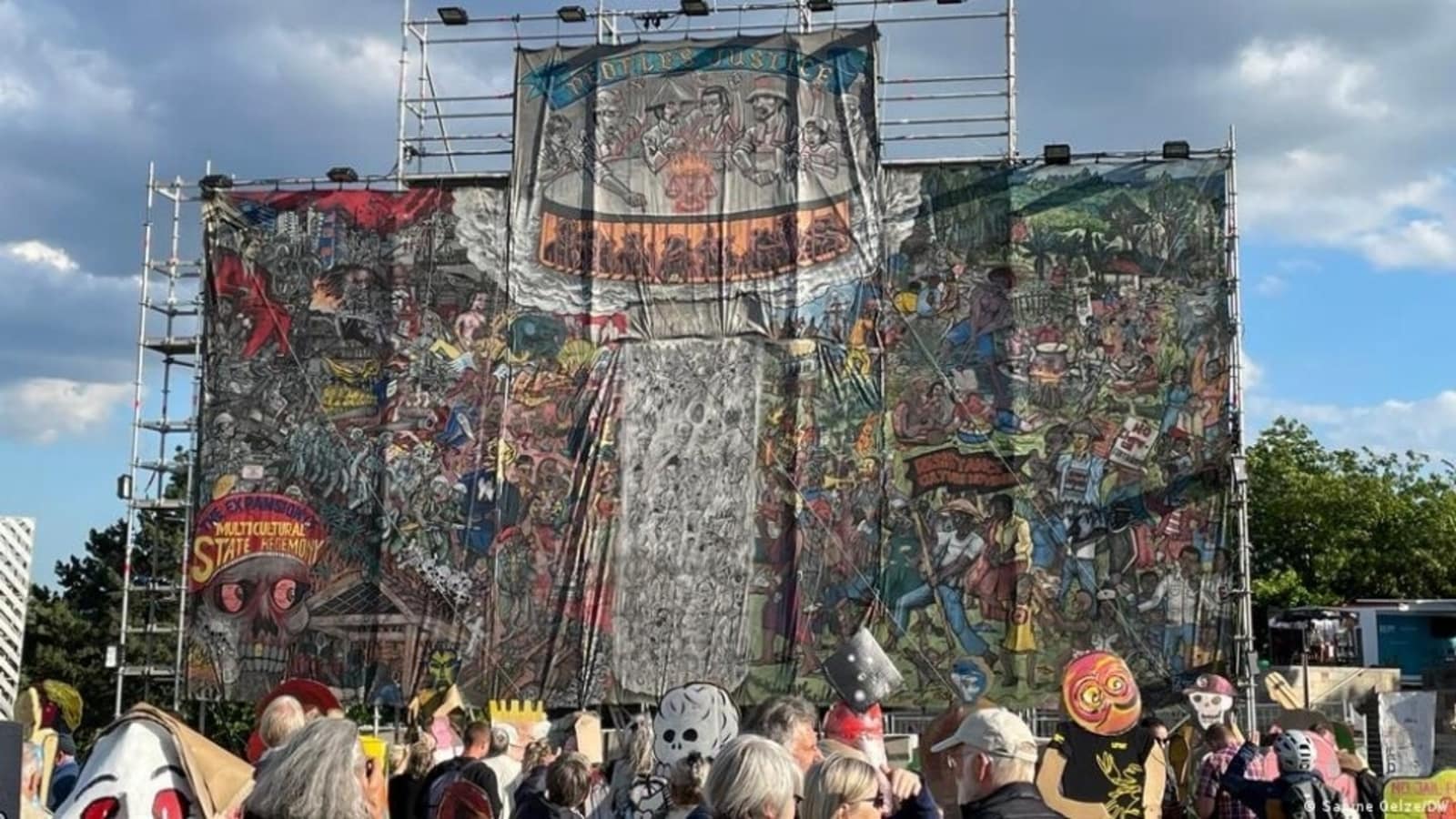 A mural by an Indonesian collective was taken down after critics complained of antisemitic tropes at Documenta, Germany’s renowned Documenta art gathering.

Just days after Documenta opened on June 18, a work on display by the Indonesian art collective Taring Padi has been decried as deeply antisemitic by the Israeli and German governments, who say the event has gone too far.

The mural, originally exhibited in 2002 in Australia, features a soldierlike figure depicted as a pig and wearing a helmet bearing the word “Mossad” — the name of Israel’s national intelligence agency.

Another figure is depicted with the sidelocks associated with Orthodox Jews, fangs and bloodshot eyes, and wearing a black hat with a SS insignia.

“We are disgusted by the antisemitic elements publicly displayed at the Documenta 15 exhibition,” Israel’s embassy said in a statement, adding that parts are “reminiscent of propaganda used by Goebbels and his goons during darker times in German history.”

“All red lines have not only been crossed, they have been shattered,” Israel’s state representative in Germany said.

Artwork to be dismantled

German media reported on Tuesday that the artwork would be dismantled. Kassel’s mayor, Christian Geselle said, “Something that was not supposed to happen has taken place” and that he was ashamed. Angela Dorn, the state premier of Hessen, where Kassel is located, said, “I am angry, I am disappointed.” She also said the incident would damage Documenta’s reputation.

A day earlier, the Taring Padi group had agreed to cover the controversial mural, titled “People’s Justice,” which is part of a large outdoor banner installation, and to add an explanatory note.

In a statement, the group said the work was “part of a campaign against militarism and the violence we experienced during Suharto’s 32-year military dictatorship in Indonesia and its legacy that continues to have an impact today.”

“It is not meant to be related in any way to antisemitism,” said the activist artist collective, which was established in Java in 1998. “We are saddened that details in this banner are understood differently from its original purpose. We apologize for the hurt caused in this context.”The covered work will become “a monument of mourning for the impossibility of dialogue at this moment,” the statement added. “This monument, we hope, will be the starting point for a new dialogue.”

‘Attaching a footnote is absurd’

Though Taring Padi maintains that the work is a critique of authoritarianism in Indonesia, Jewish community groups say blacking out the work it is not enough.

Charlotte Knobloch, president of the Jewish Community of Munich and Upper Bavaria in southern Germany, said she was “appalled by the sheer hatred of the Jews that is shown in the image of Taring Padi.”

“Persons with temple curls and SS runes, plus a pig’s head with the inscription ‘Mossad’ — that is blatantly antisemitic,” Knobloch said in Munich on Monday.

She also criticized the announcement that the painting would be partially covered up, and a note attached. “Attaching a footnote is absurd,” she said.

Josef Schuster, of the Central Council of Jews in Germany, noted that “artistic freedom ends where xenophobia begins.”

Meanwhile, the president of the German-Israel Society, Volker Beck, is reportedly filing a case with prosecutors over the image.

For the first time since Documenta began in 1955, the show is being curated by a collective, with Ruangrupa inviting artists from around the world, and especially from the Global South, to participate.

This includes the Palestinian artist collective The Question of Funding, which an anonymous blog post in January accused of being antisemitic because the artists supported the cultural boycott of Israel.

The accusation, made by an alliance against antisemitism, was rejected by ruangrupa in a public letter that demanded artistic freedom, yet spoke out in favor of political neutrality and declared their willingness to engage in dialogue.

The Documenta supervisory board, and even culture minister Claudia Roth, backed the Documenta team at the time.