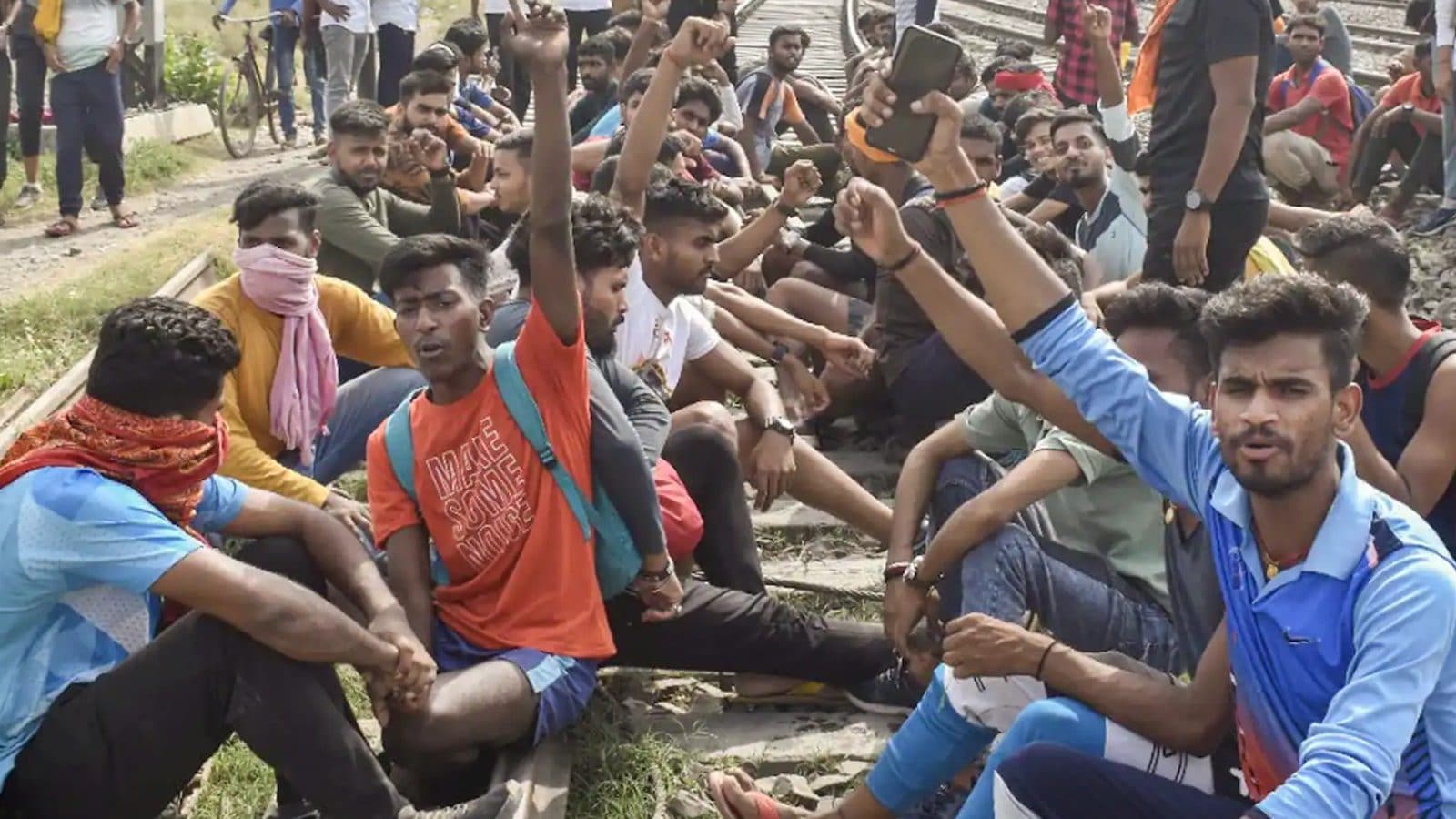 From Bihar to Gurugram, protestors across India have gone violent on the second day of demanding a roll back to the new recruitment scheme which proposes to hire youth between the age bracket of 17.5 years and 21 years to take up jobs in the Indian armed forces including Navy, Army, and Air force for a tenure of four years. The new recruitment route is facing huge criticism, candidates claim that the employment is temporary and does not offer stability to the youth employed under the new scheme.

Under this recruitment, after compulsory retirement after four years, the government plans to involve youth in civilian jobs, however, the move is widely criticised by job aspirants as well as opposition. The scheme was launched on Tuesday.

After the protest by defence job aspirants took a violent turn, police resorted to the lathi charge. After defence job aspirants protesting against the new recruitment scheme ‘Agnipath’ set a bogie on fire in Bihar, and continued protest in parts of Uttar Pradesh too, the police had resorted to lathi-charge and even firing in the sky to disburse protestors. In Gurugram too, stones were pelted on police vehicles.

The lathi-charge took place in Jammu where a group of youngsters had held protests outside the army recruitment office. In Bihar, the situation got worse as protestors damaged government property including train bogies. Police had to shoot fires to disburse angry protestors in certain parts of Bihar.

“We prepared for long & now they have brought ToD (Tour of Duty) as a 4-year job. Don’t want that but the old recruitment process,” protesting candidates in Bihar were quoted as saying by news agency ANI.

Trains were set afire, window panes of buses smashed by protestors in Bihar. In Nawada, the vehicle of BJP MLA Aruna Devi, who was on her way to a court, was attacked by the agitators who hurled stones at her car, leaving five persons, including the legislator, injured.

Earlier in Bihar, Police and protestors had confronted and police officers can be seen pushing back angry protestors.

This is the second day of protest. On Tuesday too, a large number of aspirants had jammed railway lines in some parts of UP and Bihar, as a mode of protest against the new recruitment scheme in defence forces including the Indian army, navy, and airforce.

In Chapra too, protesting students set a bogie of Barauni Gondia Express on fire.  The bogie behind the engine parked on platform two of Chhapra Junction was set ablaze.

Hundreds of young people took to the streets in Haryana’s Gurugram, Rewari and Palwal against the Agnipath scheme for recruitment to defence services, with protesters blocking highways. A police vehicle was damaged in stone-pelting in Palwal and the Agra Chowk on National Highway 19 was blocked.

In Gurugram’s Bilaspur and Sidhrawali, protesters laid a virtual seize on bus stands and roads and held a protest at Bilaspur Chowk, crippling traffic on the Gurugram-Jaipur highway, reported PTI.

According to locals, the protesters gathered in Khurja locality and the city area of Bulandshahr and raised slogans against the central government demanding it withdraw the scheme.

Bulandshahr Superintendent of Police Shlok Kumar said, “Some youngsters gathered to stage a protest in the morning. They called off the protest on the assurance of officials.” A similar protest was reported from Ballia. A group of around 60 people staged a protest at the Kotwari area under Rasra police station limits. They called off the protest late after the administration authorities spoke to them, officials told news agency PTI.

More than a dozen defence force aspirants stopped a train at Nangloi Railway Station in outer Delhi by lying down on tracks. According to police, around 15-20 people people gathered at Nangloi Railway Station around 9.45 am to protest against a delay in railway recruitment examinations and against the Agnipath Scheme. They stopped a train which was bound for Old Delhi from Jind in Haryana, police said. Police reached the spot immediately where GRP staff was also present, asked the protesters to vacate the railway track peacefully, they said. The protesters said they had applied for some government jobs two to three years ago, but the examinations for the recruitment have not been conducted yet, and they have crossed the minimum eligibility age now.

Congress leader Rahul Gandhi too took to Twitter to say, “When India faces threats on two fronts, the uncalled for Agnipath scheme reduces the operational effectiveness of our armed forces.”

When India faces threats on two fronts, the uncalled for Agnipath scheme reduces the operational effectiveness of our armed forces.

The BJP govt must stop compromising the dignity, traditions, valour & discipline of our forces.

Congress general secretary Priyanka Gandhi Vadra also hit out at the government and asked why it was making recruitment in the army its “laboratory”.

Nana Patole, President of Maharashtra Pradesh Congress Committee, said “I saw visuals of one youth protesting putting petrol on himself – I condemn it but this privatisation or army can cost dearly to our nation and this government is playing with the future of our youth and that’s why the resentment. When will the centre stop playing with the future of the youth? One can’t say give this scheme a chance because of the face of it – it’s flawed and could have dangerous repercussions.”

Samajwadi Party president Akhilesh Yadav on Thursday hit out at the central government over the Agnipath scheme, calling the move negligent and potentially fatal for the country’s future. As announced, ‘Agnipath’ or ‘Agniveer’ is a scheme for recruiting soldiers in the Army, Navy and Air force, to be hired for a term of four years on contract. The scheme was announced by Defence minister Rajnath Singh on Tuesday.

“The security of the country is not a short-term or informal issue; it expects a very serious and long-term policy. The negligent attitude that is being adopted regarding military recruitment will prove to be fatal when it comes to the protection of the future of the country and the youth, Akhilesh said in a tweet. Agnipath se path per agni na ho (Agnipath’ must not set the path on fire),” he added in the same tweet.

The recruitment process was halted for the past two years in the Indian army and has resumed within a new enrolment route. Candidates also claim that the salary bracket offered is very low and that the new scheme has not been tested in a pilot phase and has been directly rolled out.

The key issues raised by job aspirants include –

— No pension, lack of benefits for Agniveers

Not just on road and rail, many aspirants have been voicing their views on social media platforms including Twitter.

Addressing one of the primary concerns of having a career after a four-year tenure, the Ministry of Education said that the in-service training of the Agniveers (recruits under the Agnipath scheme) will get 50 per cent credit for an undergraduate degree. This credit-based programme has been designed by IGNOU and will also be executed by the open university.

The government had said that it will start the recruitment rallies to hire Agniveers in 90 days and about 46,000 soldiers will be recruited under the scheme this year. This will include 40,000 enrolments in Army, 3,000 in the air force and the Navy combined. Candidates will get a salary in the range of Rs 30,000-Rs 40,000 per month, with allowances extra.

Further, youths who serve for four years in the armed forces under the ‘Agnipath’ scheme announced by Prime Minister Narendra Modi will be given preference during recruitment to Assam police, Chief Minister Himanta Biswa Sarma said on Wednesday, “Agniveers (those who serve in Agnipath scheme) who return after four years of service in the Armed Forces will be given special preference in Assam Police recruitment,” Sarma said at the concluding day of BJP’s two-day state executive committee meeting here. Sarma, who spoke on a plethora of projects undertaken by the Assam government, said the linking of Aadhar with ration cards which was undertaken following the prime minister’s initiative had found many fake beneficiaries.