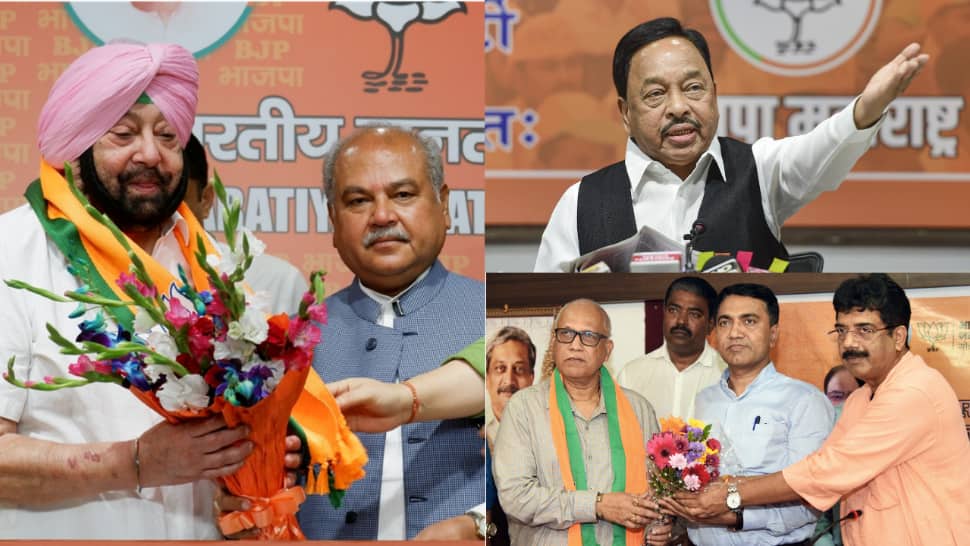 New Delhi: Amarinder Singh on Monday (September 19, 2022) joined the long list of former chief ministers of other parties who have joined the Bharatiya Janata Party (BJP) in the last few years like Digamber Kamat and SM Krishna. Singh joined BJP in the presence of Union ministers Narendra Singh Tomar and Kiren Rijiju. He had earlier in the day met BJP national president JP Nadda.

Singh was the chief minister of Punjab twice from 2002 to 2007 and then again from March 2017 to September 2021 before he was ousted unceremoniously by Congress. He later quit the Congress and formed his own Punjab Lok Congress (PLC), which he merged with the BJP on Monday. His party, however, had failed to make a mark in the last assembly election in Punjab and could not win a single seat.

Digambar Kamat, who was the Congress chief minister in Goa from 2007 to 2012, joined the saffron party recently.

Former Maharashtra chief minister Narayan Rane quit the Shiv Sena to join the BJP. Rane, the strongman in Konkan politics, joined the BJP ahead of the 2019 state polls. He was the 13th chief minister of Maharashtra from February 1, 1999, to October 17, 1999, after Manohar Joshi quit the post.

Vijay Bahuguna, who served as the 6th chief minister of Uttarakhand, from March 2012 to January 2014, also quit the Congress to join the BJP after he resigned following the ‘mishandling’ of the 2013 Uttarakhand floods.

Arunachal Pradesh Chief Minister Pema Khandu had also quit the Congress and joined the BJP. In September 2016, along with 43 Congress MLAs, he defected to the People’s Party of Arunachal, an ally of the BJP, and became the chief minister of the state.

Babulal Marandi was another former chief minister who merged his Jharkhand Vikas Morcha (Prajatantrik) with the BJP in February 2020. He is the first chief minister of Jharkhand (from November 2000 to March 2003 when he was in the BJP). He later quit the saffron party in September 2006 and formed his own outfit.

Besides the former chief ministers, several other top leaders of Congress and other parties have joined the BJP in the last few years. These include former Union ministers Jyotiraditya Scindia, RPN Singh, and Jitin Prasada.

Former Congress leader Himanta Biswa Sarma, a minister in the Congress government in Assam, had also joined the BJP after quitting the Congress.

Want To Control Your Appetite? Here Is All That You Need To Know About It