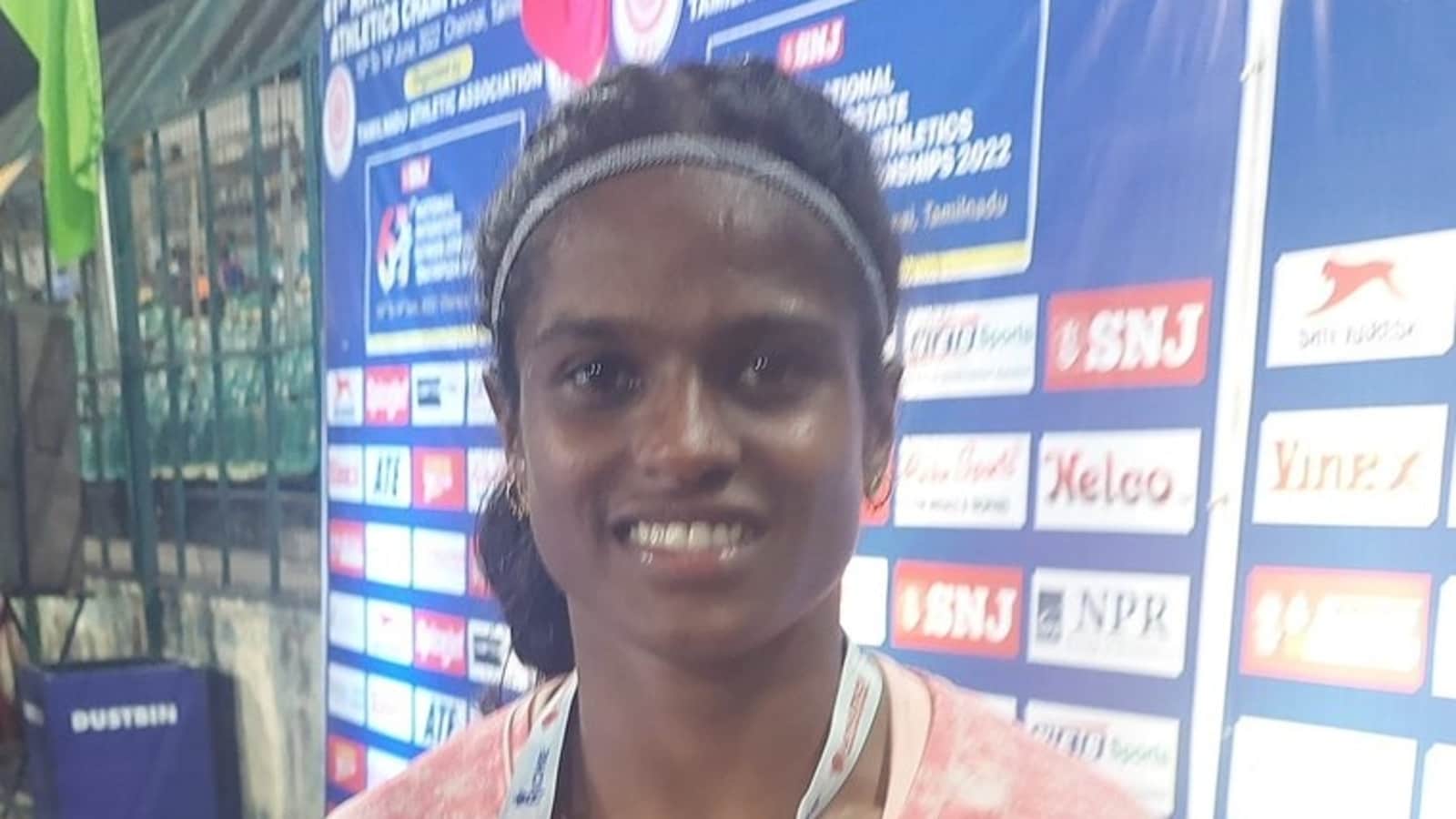 The details are sketchy, but Pramila Aiyappa remembers significant bits of the day she and her husband Sri noticed a lanky girl leap 6.20m in Bengaluru’s Sri Kanteveera Stadium in 2017. “I remember Sri drawing my attention to her. She had decent technique and good explosive power,” recalls the Arjuna Award-winning former heptathlete.

Pramila is talking about Aishwarya Babu, a double gold medallist at the recently-concluded Inter-State Athletics meet in Chennai, and the only woman other than Anju Bobby George to go past 6.70m mark in the long jump event in Indian athletics.

“She clearly stood out. There was definitely some potential to work with,” says Pramila, now an athletics coach at South-Western Railways. Still, the coming together of Aiyappas and Aishwarya, 25, was more by serendipity than design.

Oblivious to the fact that she had caught Pramila’s eye, Aishwarya approached her a few days later with one request — “She wanted to be trained by Sri,” says Pramila. The reason was Sri’s burgeoning reputation as a jumps coach. Essentially a freelance coach who is into his 22nd year as a professional, Sri had groomed Pramila in her heyday before setting up an athletics club named Fusion in 2009 where he trains around 20 jumpers and quarter milers.

“I was skeptical to accept her request, to be honest. That’s because a lot of Railways athletes would just not show up after a few sessions. But Pramila convinced me,” says Sri. There was, however, another issue to deal with. Aishwarya had recently undergone an ACL surgery on her left knee, which meant immediate training was out of question. A lengthy rehabilitation followed under Sri’s supervision, and by the time 2019 arrived, Aishwarya was ready to compete again.

“She lacked strength, and we needed to tweak her technique a bit. We introduced her to weight training and gym sessions. It helped that she was always receptive and open to suggestion,” Sri, a former 400 metres national champion, adds.

When Covid-19 struck and Sri Kanteveera, as well as SAI campus, became out of bounds, Aiyappa found a state-run facility in Vidyanagar, some 35 kilometres from Bengaluru. She was also introduced to sand training — running and jump routines on the beach — to build her lower body strength. Gradually, Aishwarya’s distances improved and her appearances on the podium started becoming more frequent.

By the time this year’s India Grand Prix came around, she was confident of touching the national triple jump mark. “I can’t say about long jump, but in triple jumps, I was sure I’ll get close to the record,” says Aishwarya. She developed a slight niggle in her left hamstring during the competition, but still managed a triple jump of 13.94m, enough to win the event but 0.17m shy of the then national record, held by Mayookha Johny since 2011.

Aishwarya, still carrying the niggle, participated in an inter-railways competition in Kolkata next, where a moderate attempt of 13.71m was enough for a top finish. The real prize though was the Federation Cup, set to begin two days later. Aiyappa decided not to scupper Aishwarya’s Commonwealth Games selection chances by risking aggravation and pulled her out of the Federation Cup.

“That was a bummer…really frustrating. I knew I had a real chance of breaking the national record given the rhythm I was in,” Aishwarya reckons. She didn’t have to wait for too long though. Two months on, she entered the record books twice, first with a jump of 6.73m in long jump, and a day later, a leap of 14.14m in triple jump. The national record finally belonged to her.

“It felt really special. I always wanted to prove myslef, and that was the first national record I owned at any level,” she said, before proceeding to thank a bunch of people, chiefly her parents, coaches, employer, and a certain Mohan Alvas from Alvas Education Foundation who ensured she maintained the balance between education and athletics. Aishwarya holds a post-graduate diploma in Commerce, while her elder brother is an engineer in Australia. Her younger brother is pursuing aeronautical engineering in Switzerland. Education has always been a priority in her household, and yet when she showed an inclination towards sports, her parents — her father is a traffic cop and her mother is a homemaker — extended their full support.

Back for the long jumps final just a day after her incredible triple jump, Aishwarya appeared out of sync and managed only one legal jump in six attempts. An effort of 6.60m fetched her the gold medal, but the disappointment is distinct.

“It was a bad day. I was dead tired, completely sapped. Three jumps (qualifying round included) in 4-5 days in that heat was a bit too much,” she says. Sri concurs. “The conditions were brutal. Triple jump takes a lot out of your body. A jump of 14.14m was understandably tough on her in that heat, and she was not in proper rhythm the next day. The body has to get used to different jump techniques when you switch from long jump to triple jump and vice-versa, and I don’t think she got that time. Next time, if the scheduling is so tight, we will look to participate only in one event.”

Aishwarya and Aiyappa have now set sights on the Commonwealth Games, her maiden international competition. “It will be nice to begin my international career with a medal,” quips Aiswarya, who has resumed training after a week’s rest.

Coach Sri expects a “14.25-14.50 metres” in the near future, while Pramila reckons Anju’s long jump mark can be breached “easily, anytime.” Anything close to her personal best in Birmingham, and Aishwarya will be in a medal reckoning at her debut CWG. A jump of 13.92m took the bronze in Gold Coast 2018 (Aishwarya’s best is 14.14m), while 6.75m in long jump (Aishwarya’s PB is 6.73m) was the third-best leap then. “I am ready to give my best,” she says.