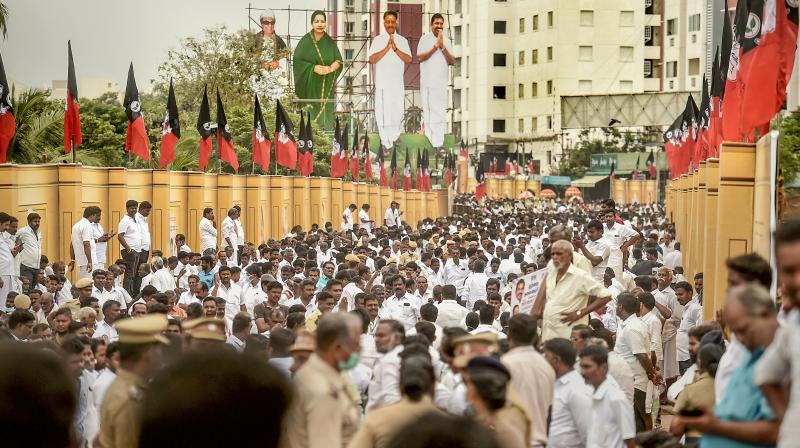 Chennai: Amid commotion, the Executive and General Council meetings of the main opposition AIADMK is all set to commence here on Thursday against a backdrop of ‘single leadership’ demand favouring Joint Coordinator Edappadi K Palaniswami.

A palpable sense of anxiety prevailed as supporters of O Paneerselvam (OPS) and EPS engaged in rival slogan shouting and some of them loudly argued against one another and voiced their full-throated backing to their respective leaders. As party coordinator Panneerselvam and Palaniswami (EPS) entered the premises of the hall -the venue of the meeting- their supporters raised slogans welcoming them.

As ‘Otrai Thalamai Vendum’ (We want single leadership) and other slogans against OPS rent the air, it led to concerns, prompting leaders to appeal for peace and calm. Deputy Secretary R Vaithilingam was among the OPS’s supporters who were present. While OPS was not welcomed by key functionaries and former Ministers, EPS was accorded a rousing welcome.

While OPS was the first to enter the venue along with his supporters and EPS made a dramatic entry later when his followers jostled to welcome and take him towards the dais. Veterans including C Ponnaiyan, Dindigul Srinivasan, K A Sengottaiyan and senior office-bearers like former Ministers D Jayakumar are present to take part in the party’s brainstorming meet, which is expected to look into the sole leader demand though no decision is likely in view of a court directive.

The Madras High Court has ruled that no unannounced resolutions could be taken up. It has restrained the EPS camp from initiating any decisive move over the single leadership issue.

Though both OPS and EPS were accorded a warm reception by their supporters, the latter appeared to have stole the show as he was accorded more receptions at a string of key intersections.

A massive turnout of party workers who raised slogans for a single leadership and a rousing reception has made the meet, one more show of strength by the Joint Coordinator’s camp. Party workers showered flowers and petals on EPS’s vehicles to welcome him and it took over a hour and half for the leader to reach the venue.

A security blanket was thrown over the suburban locality to ensure law and order.

As many as 23 resolutions are set to be adopted. The venue of the meet at suburban Vanagaram, a spacious marriage hall was decorated with flowers and the entire locality wore a festive look with party flags fluttering everywhere while colourful flex boards of leaders were placed prominently.

One of the boards displayed a striking portrait (using an old photograph) showing Panneerselvam giving a bouquet to EPS. The areas in and around the venue of the meeting witnessed severe traffic congestion and it took hours together for the bumper to bumper traffic to ease.

F.D.A. Lets Juul Appeal Ban and Stay on the Market During a Review