Agnipath protests refuse to die down across India 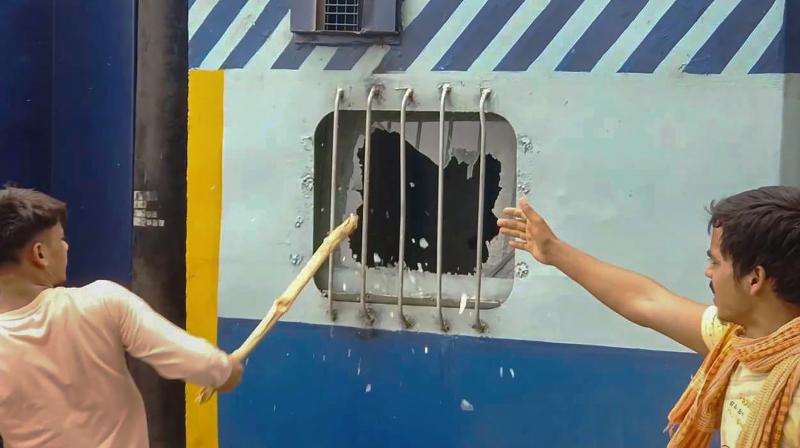 New Delhi/Patna/Hyderabad/Bhopal: The protests against the military’s new “Agnipath” recruitment scheme, which started from the East and North and spread to several other areas, on Friday engulfed cities in South India too. In Secunderabad, one person died during firing by the police, which was forced to open fire at hundreds of protesters as the situation escalated into large-scale violence and arson. The mob, with their faces covered with handkerchiefs, barged into the railway tracks and torched everything in sight, besides looting the parcel office. In Bihar, the protesters targeted the homes of several BJP leaders, including its state chief Sanjay Jaiswal and deputy chief minister Renu Devi.

The main target for expressing anguish against the new recruitment policy remained the Railways as over 200 trains were affected due to the protests. Around 35 trains were cancelled and 13 short-terminated since the protests erupted on Wednesday. Railway minister Ashwini Vaishnaw urged the youths not to destroy railway property to vent their anger.

The worst-hit East Central Railways — which covers Bihar, Jharkhand and parts of Uttar Pradesh, the states which have seen wide protests — also decided to “monitor” the operations of eight trains due to the stir.

In Secunderabad, the Telangana police fired at least 10 rounds to disperse crowds, which left one person dead and 12 others injured. Three trains and several stalls were set on fire by the rampaging mobs. Besides, they vandalised trains, blocked railway tracks with two-wheelers, wooden boxes, garbage cans, gunny bags and wheelbarrows of railway porters, and stole goods kept in the parcel office. Around Rs 20 crores in property loss was expected, Railways DGP Sandeep Shandiliya said.

Angry mobs targeted trains and railway property in their protests against the Centre’s Agnipath scheme for recruitment in the armed forces. The coaches of three running trains in ECR and one empty rake in Kulharia, Bihar (also in ECR) were damaged by violent protesters. One coach of a stationary train was also damaged in the washing line at UP’s Ballia.

Officials said the protesters also erected barriers on the Agra-Lucknow Expressway to stop buses and pelted stones at them while the traffic also briefly came to a standstill on the Yamuna Expressway near Noida. The protests also erupted in Varanasi, Firozabad and Amethi, which caused damage to government and private buses, among others. Ballia SP Raj Karan Nayyar said the youths were being persuaded to call off their stir and sent back. “The incident has been videographed. So far, no arrests have been made,” he said.

In Bihar, the protests grew more aggressive and violent on the third day running, with the agitators damaging railway property and targeting the houses of senior BJP leaders. Deputy CM Renu Devi, whose house was among those targeted, called the agitators “goons instigated by the Opposition”. She said: “What else could be the reason behind this attack on BJP leaders? It’s the Opposition which is behind those who have been targeting the houses of leaders of our party. My house in Bettiah town was attacked but thankfully no one was hurt in the incident.”

She added: “The youths are confused, that’s why there is a problem. This will end once they understand the scheme.”

Reports from various districts of the state also suggest that uncontrolled protesters on Friday ransacked and damaged rail property. Many bogies of express and passenger trains were torched by the protesting youths at various railway stations in the state.

Bihar has seen a violent agitation against the Agnipath scheme since the day it was announced. “What will happen after the completion of four years in the armed forces? We want the Central government to reinstate the previous recruitment system”, the protesters said.

Meanwhile, the Opposition RJD has announced its “complete support” to the youths agitating against the “Agnipath” scheme. RJD state chief Jagdanand Singh said the party will also support the state-wide bandh called by youths on Saturday.

In Madhya Pradesh, the stir spread to new areas as protests were staged in Indore, Morena and Guna. However, no major incidents of violence were reported from anywhere on Friday, though in Indore some youths staged a protest at the railway station and pelted stones at the police. They tried to set fire to a train but were chased away by the police.

The demonstrators also staged a blockade on the Mumbai-Agra highway for some time. The police resorted to a mild lathi-charge to disperse them. A youth, identified as Yogendra Singh, in Morena was arrested for circulating messages on the social media to instigate youths to indulge in violence, the police said.

Some physical training clubs in Gwalior have come under the scanner in the wake of the vandalism. Gwalior collector Kaushalendra Vikram Singh directed the police to seek details on these clubs, saying that information was received on the involvement of some students of physical training clubs in some unwanted and unruly activities. Sources said 10 managers of these clubs in Gwalior were under the local administration’s radar for Thursday’s violence in the city and eight of them were questioned. As many as 37 people were arrested for the violence Gwalior so far.

The rioters were being identified from footage of CCTV cameras installed at various places in Gwalior and also from videos circulated in the social media. In another development, the CCTV footage where violence took place in Gwalior showed the protesters taking videos of their actions and selfies while indulging in vandalism. They were also seen laughing after beating people at a place in the city.

In Gurgaon, Haryana, prohibitory orders under Section 144 CrPC have been imposed as a precautionary measure even though no fresh protest was reported from the city. In New Delhi, some Metro stations were shut due to the students’ protests.