A Medieval Dramedy Sheathed in Magic, and the Absurd 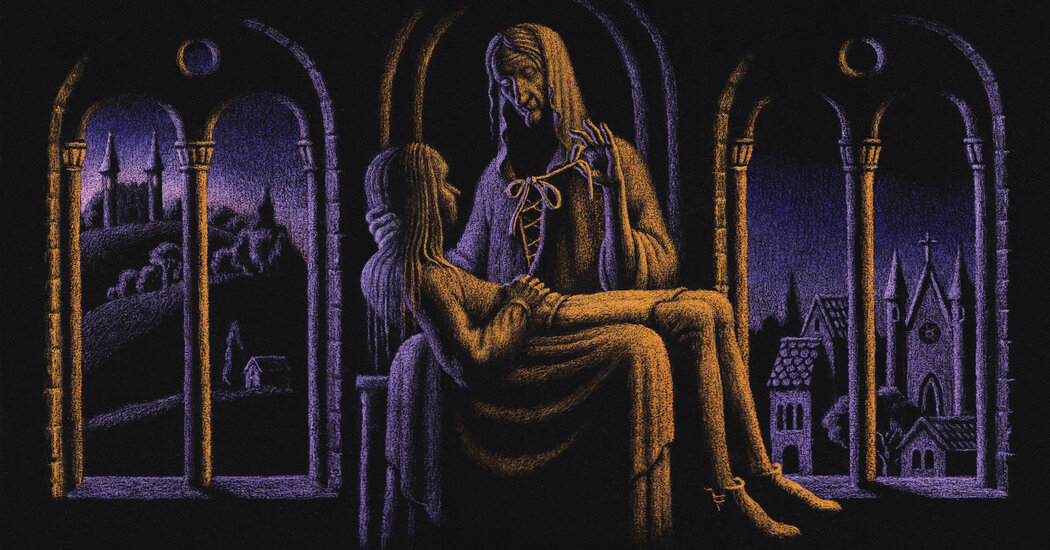 Moshfegh’s considerable gifts as a stylist give these cartoonishly revolting scenes a visceral punch, but the further the reader travels over the rutted cart tracks of Lapvona, the more uncertain the terrain becomes. The novel is medieval in the way one of those village-building computer games is medieval: not a portrait of a particular time or place, a complex culture with a cosmology and a recognizable system of feudal obligations; but a fantasy genre setting in which medieval things can happen. Its higher aesthetic cues are the plague-stricken carnival of Ingmar Bergman’s “The Seventh Seal” and the hunchbacked heretic in Umberto Eco’s “The Name of the Rose,” screaming as he’s burned at the stake; but unlike Eco or Bergman, Moshfegh has little interest in religious faith, generally presenting it in cynical terms. “Lapvona” is also frequently reminiscent of “grimdark” fantasies like “Game of Thrones,” and the slapstick comedy of “Monty Python and the Holy Grail.” Occasionally, in the relentlessness of its focus on violation, it seems to gesture toward something tougher and more programmatic, the philosophical horror of the Marquis de Sade, or of Georges Bataille.

It’s clear that “Lapvona” isn’t intended to be a conventional “historical novel” filled with authentic detail and period touches. But even taken as a postmodern exercise, the world building is perfunctory. Villiam lives up a hill in a manor house with a drawbridge. It is remote enough from the village to have a secret lake in which he hoards water while drought ravages the land, yet close enough to be walkable from the church. Jude pays “monthly dues” to that church, though he never attends, sounding for all the world like a congregant in the contemporary American suburbs, rather than a medieval serf. Villiam’s business dealings with the northerners make little sense, and his willful destruction of his fiefdom, presumably the source of the surplus that sustains his lordly lifestyle, is weightless and without consequence — while the starving in the drought-stricken valley feed one another dead spiders, he feasts and swims.

The novel seems neither wholly ironic, in that it sincerely wants to shock, nor fully committed to the reality of its world, at least not in a way that would allow its shocks to form a circuit with anything else. It’s hard to know what to do with such scenes as the one in which Jude either rapes or imagines raping Agata, a woman he once kept as a child sex slave who is now a nun. “Jude clumsily poked at the red froth of hair on her pubis,” Moshfegh writes, “then stabbed at the lips to her sheath, which was clenched tight like a fist.” Agata is also mother to Marek, who thinks she died when he was a boy; and we are told that Jude had “last known her sheath tortured and bleeding, straining to birth a distorted skull.” This has all the excess of a Jacobean revenge tragedy, shading into the conventional register of pornography as Jude thinks about his victim’s “tight hole,” his penis “hard and throbbing.” It’s too violent to be funny, and too silly to be meant as anything else. “Lapvona” has the odd affect and episodic quality of ’80s-era VHS slasher movies, made for an audience that wanted an endorphin rush of terror coated in knowing genre tropes and gory slapstick. The novel’s most enduring creation, the one that stays in the mind, is the witch Ina, with her sly wit and all-embracing worldliness. Her refusal to conform links her to other Moshfegh characters, in other settings. Surrounded by chaos and terror, she knows what kind of story she’s in. “I bet you this gold ducat,” she tells an elderly visitor, “that I remember more terrible things than you do.”