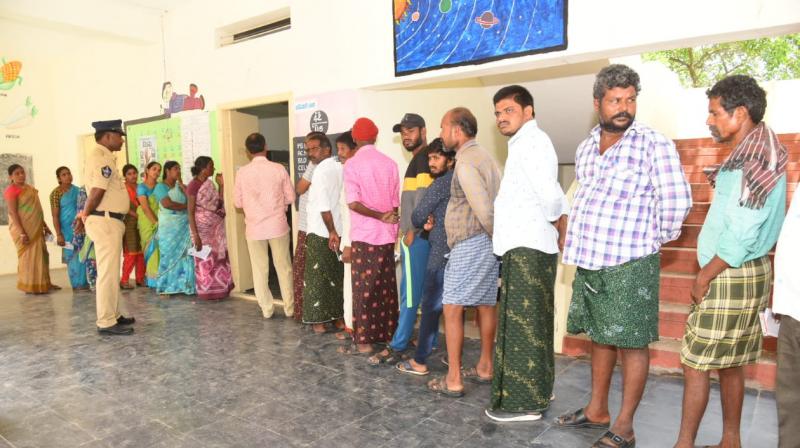 Nellore: Other than some wordy duels between YSR Congress and BJP leaders in a few places, the polling for the by-election to Atmakur assembly constituency on Thursday was peaceful.

The cloudy weather since morning helped raise the polling percentage to 64.17 by 6pm — from the 11.56 per cent at 9am.

The polling percentage of 64.17 per cent came as a relief to YSR Congress leaders worried over the poor public response during the campaign period.

Though there are 14 candidates in the fray including BJP’s Bharat Kumar, Mekapati Vikram is believed to be in the forefront.

The advantage for him was also the sympathy wave due to the demise of his brother and sitting MLA Goutham Reddy.

Chief Minister Jagan Reddy posted a minister and a legislator as in-charges for the seven mandals and fixed a target of 1 lakh majority.

All the ministers including Peddireddy Ramachandra, Balineni Srinivasa, Ambati Rambabu and Govardhan Reddy remained stationed in Atmakur for over two weeks and worked for the party.

The BJP also deputed its star campaigners such as Satya Kumar, Purandeswari, GVL Narasimha and Somu Veerraju, they were no match to the ruling party leaders, who used all the resources at their disposal for the electioneering.

Another weak point to the BJP was its nominee Bharat Kumar was seen as an outsider to the segment.

There was a wordy duel between Mekapati Rajareddy, uncle of Vikram Reddy and BJP candidate Bharat Kumar at booth 9 in Batasinganapalli village when the latter found Raja inside the polling station.

Bharat reminded Raja Reddy that he resides in Bengaluru where the BJP is in power.

BJP and YSRC cadres locked horns at a polling booth in DC Palli of Marripadu Mandal. Police intervened and dispersed the crowd.

Tension prevailed at Krishnapuram village of Marripadu Mandal when ruling party men allegedly kidnapped BJP agent Vishnu. Bharat saved him after noticing him being seated in a car at Timmanaidupeta.

The polling started at 7am and continued up to 6pm.

Addressing media at Amaravati, chief electoral officer Mukhesh Meena said there were technical snags for nine EVMs after the conduct of the mock polling at 7am and they were rectified immediately.

A reception centre and a strong room were set up at Andhra Engineering College in Atmakur to secure all the EVMs. The SEC received 38 complaints on C-vigil web portal about the conduct of the bypoll and attended to them. Some 1,339 polling personnel, 1,100 police personnel and three companies of central forces were deployed for the by-poll.