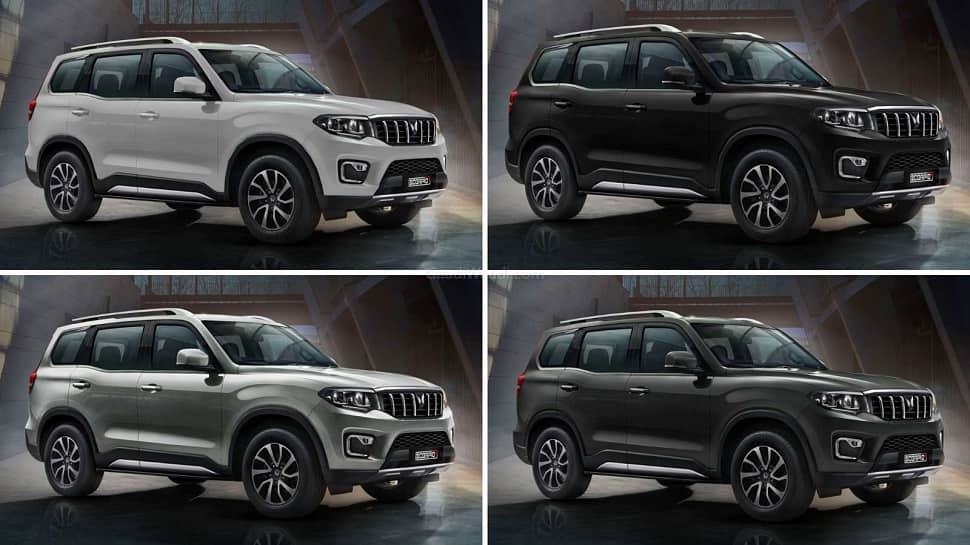 Mahindra and Mahindra, India’s largest UV maker is all set to launch the 2022 Mahindra Scorpio-N SUV on August 27 in the country. Unveiled recently, the Mahindra Scorpio-N will be sold along side the existing model that will be renamed as Scorpio Classic, which needs no introduction whatsoever. The butch SUV from the homegrown brand has a cult following and Mahindra has launched a bunch of teasers highlighting the features, design and engine details of the new-gen avatar of the Scorpio-N. While Mahindra has officially revealed only two colour options for the 2022 Mahindra Scorpio-N, including Olive Green and Red, new digital renderings puts light at the other possible colour options that the SUV can get and it will look like in various paint schemes.

As per the digitally created images by GaadiWaadi, the Scorpio-N is shown wearing four new colour options, namely Black, Grey, Silver, and White. This gives an idea to prospective buyers on the various colour schemes. Only that Mahindra has not formally announced these colour options. However, all of these paint options are common to cars sold in India.

The upright stance of the SUV is unchanged in the new Scorpio-N rendition as well. The all-new model has a bold-looking face with a high-set bonnet that is further accentuated by tight creases. Over to the sides, the Scorpio-N is styled with large DLO, and the window line is garnished with chrome surrounds. The wheels appear to be 18-inch in diameter. However, the brand hasn’t revealed the size yet. The rear fascia also remains under the wrap, but the x-mas style tail lamps and an upright boot lid will gel well with the overall design.

Mahindra has upped the ante with the XUV700. Similarly, the Scorpio-N will come with an extremely long list of features. It is confirmed to be offered with a panoramic sunroof, LED headlamps, dynamic-swipe turn indicators, large touchscreen infotainment screen, Android Auto & Apple CarPlay compatibility, automatic climate control, connected car features, and more. In case Mahindra plans to go full blast with the new model, expect the SUV to offer ADAS tech as well.

The ladder-frame construction remains the preferred choice for true-blue SUV enthusiasts. The Scorpio has been carrying forward the legacy of old-school charm with modern yet butch styling. In the new-gen avatar, it just leaps ahead with an all-new ladder-frame chassis, claims Mahindra. Hence, it is safe to expect the new Scorpio-N to score better results at a crash test facility.

Two engine options are likely to be offered on the forthcoming Mahindra Scorpio-N. A 2.2L oil burner and a 2.0L turbo-petrol motor will be a part of the package. Transmission choices will comprise a 6-speed manual gearbox and a 6-speed torque converter automatic transmission. The option of a 4×4 drivetrain will be on cards as well. However, it may be restricted to the diesel variants only.

The Mahindra Scorpio-N quintessentially has no rival as of now. Nevertheless, prospective buyers of models like the Hyundai Alcazar, MG Hector Plus, and Tata Safari will keep the Scorpio-N on their lists. Talking about the prices, we are expecting the entry-grade petrol trim to start from around Rs 12 lakh, ex-showroom. The range-topper’s pricing might go up to Rs 20 lakh, ex-showroom.

The suspect and his family had long ties to Highland Park and a troubled past.